My first love was a rabbit with an undisclosed name (my wife thinks it's her, so don't go telling her otherwise). My first whisky love was Ardbeg. Still nothing much to go on with this, except that when I first discovered the standard 14yo bottling of the Clynelish, I was sold. When I heard my favourite whisky blender known for using large amounts of Clynelish was about to release this puppy, my curiosity was triggered.

Conclusion: I might be biased, a fan of Clynelish and the people and products of Compass Box, but this is great. A little tongue numbing at first, but she doesn't take long to convert that into a creamy (waxy) mouth feel, with lots of vanillas and juicy, sweet red berries. Not much smoke, but just enough to give it that extra punch it may not even need.

The drop of three year old whisky, the kitsch label and frankly, the whole idea behind this release, is a big "fuck you" to the industry, the SWA and the UK and EU law and their battle for whisky transparency. They are stalling their fight for now, having found a loophole where we, the consumers, can contact Compass Box if we would like to have more information about the content of the bottle we just purchased.

More info: from the fact sheet:

"Composed of less than 1% three year-old malt whisky produced near the village of Brora, 90% malt whisky of an unstated age from the same distillery and around 9% peaty malt whisky distilled on the Isle of Skye, regulations only permit us only to share details of the age of youngest component! No matter. For it is this three year-old that is most important to us. Aged from new-make spirit in our own first-fill American oak casks, it imparts a lively vivacity and represents a milestone in our development as whisky makers." 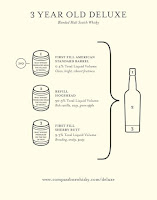 From that, combined with a little research and the use of the provided information online, we can build up the following:

We have contacted Compass Box for confirmation, and when this comes through, I will update the note and let you know.

Limited release of only 3,282 bottles worldwide.

.many thanks to Compass Box for sending us the sample
. Wednesday, October 05, 2016