We have received a rather nice package from the friendly people of the Loch Lomond Group, containing a sample from the in 1994 closed Littlemill distillery. Steve from the whiskywire was so kind to organise a so-called "flash blog", where whisky-bloggers and whisky lovers throughout Europe got to tell their followers what they thought of this new release on October 14, 2015. Sadly, our package arrived a day late. No big deal, I found some time to squeeze my nose in a glass and express my thoughts two days late. Well, somebody had to come in last... 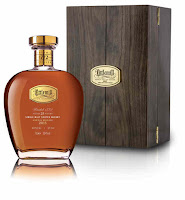 Conclusion: a really nice dram. Very 'entertaining'; she keeps going and changing. It is too bad about the slightly metallic marmalade bitter at the end of the finish, and I am sure that when I would have given her some more time, I could have squeezed out a bit more. Sadly, the little bottle is empty and gone. A good experience, but I would think that for this kind of money, I could get many more interesting and just as complex different whiskies.

More info: This is a marriage of ten different casks, some of which have been distilled on December 17, 1989 and were put to rest at 68.5%. Another batch, distilled from April 1st- April 4th 1990 was put in different casks at 68.6%-68.7%. Among the ten casks, a mixture of American and European oak casks was used to mature, and as a final touch, all casks were put together to be married in 1st fill ex-Oloroso casks. Only 1500 bottles were released.
. Friday, October 16, 2015